So here we go. As of last month (when I got my sexy new streaming computer, C.H.L.O.E.2 – photos to come on the site) I have decided to get a bit more serious about my Starcraft 2 playing and casting. By definition being a better player and practicing more will allow me to be a more analytical with my casting as opposed to play-by-play, so the correct approach (neglected by many would-be casters in my opinion!) is to make sure my playing strength continuously increases while still casting on the side. Luckily, as a (long time ago) trained Baritone my voice is not in danger of wearing itself out any time soon, so I won’t need too much to keep that side of my casting up – maybe a weekly submission to YouTube. It’s also important to churn out content regularly and I’d like to keep scanning for games that perhaps are cast less-often, or some juicy BNet games between top players to showcase.

For now, though, the training is at its beginning state. I’ve taken a screenshot of my Battle.net profile and this will be the foundation of what I’m improving on: 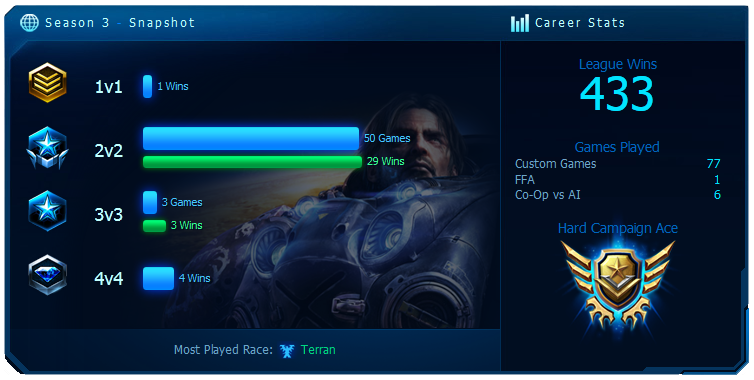 I should point out that the above is no fluke – I have neglected 1v1 in favour of playing more social team games for the last few months and the 3v3 and 4v4 ranks are Random Teams. The 2v2 rank is with a practice partner / coach (Theovide, who I will heap praise on in a later post) although my regular 2v2 rank is still high Diamond / low Masters. I got back into 1v1 at the end of the ladder season, where despite being in Diamond last season and *winning* my placement match, I was unceremoniously dumped back into Gold. I guess the good old MMR has been steadily increasing for the rest of the world while I was away – quite a lot, in fact.

My goal, which is important to state now, for Season 4 of the SCII ladder is to become Master’s level with my main race (Terran) and play at a comfortable Diamond level at least with both of my off-races. In the process of improving my gameplay, I hope to not neglect my casting – and in fact not only cast online games but do the odd local LAN event as well.

I will update on both my playing and casting (and put into both categories if the relevant post applies to both, such as this one) on this blog as time progresses. Let the training commence!