As some of you may know, I was recently at Gadget Show Live to help filming for Turtle Beach, where a good friend of mine (@Sam_Deans) works. While there, I noticed there was a stand by The Keyboard Company which made me very excited – and here’s a very simple reason why.

I’m sure most people who haven’t used a mechanical keyboard before would ask exactly the same question: What’s the big deal, AND what’s the difference between all of these different switches? Not to sound too cliché but in this particular case it really is a ‘You need to try it to understand’ sort of thing. Therefore, because I saw about 20 different keyboards on the wall and a chance finally to compare and contrast many of them, I jumped at the chance to try them out and possibly buy one, while I had the opportunity to gain a bit of an understanding of how mechanical keyboards work.

Filming and exploring Gadget Show Live was a lot of fun over the weekend; the final product as you can see is here, with Sam presenting – I hope I did the video camera justice!

It was a lot of fun and I had an absolute blast – and my reward for my efforts was a final day to do whatever I wanted, and I spent a good hour or two at the Keyboard Company’s stand to try out and talk about the various different mechanical keyboards.

For the record, I would recommend anyone wanting to read up on mechanical keyboards check out these links:

To cut the long story short though, I was really enjoying myself trying out the different keyboards on their test computer (does anyone remember The Typing of the Dead and how it was the BEST GAME EVER?) and in the process appeared to accidentally draw a crowd.

The above run was done on Cherry MX Browns; I was about the same speed with Blues and Browns, but shortly after this video was taken I was offered a discount on a new keyboard if I could somehow hit above 750 accurate characters per minute – by the awesome managing director Bruce. After some finger flexing, I managed to accomplish this a few attempts later with the Browns and those were the ones I went with. I personally love the Blues and enjoy typing with them a bit more but they were simply way too loud for any sort of sensible streaming so I got the Browns instead which were a good compromise.

We had a great afternoon and I thoroughly enjoyed myself – but as I wrapped up my keyboard, I had one cheeky special request – in the spirit of FPS gamers who love brightly coloured WASD keys, I thought something similar could be done for Starcraft II; something a little bit unique. Possibly something to remind me I still need to get a lot better at the game and spur me on a bit as well (sadly my current level really isn’t where I want it to be; something I am aiming to rectify in the coming months). Sure enough, two weeks after my keyboard was home with me, I received a small parcel in the post from Bruce – and now the keyboard is definitely mine. ;-) 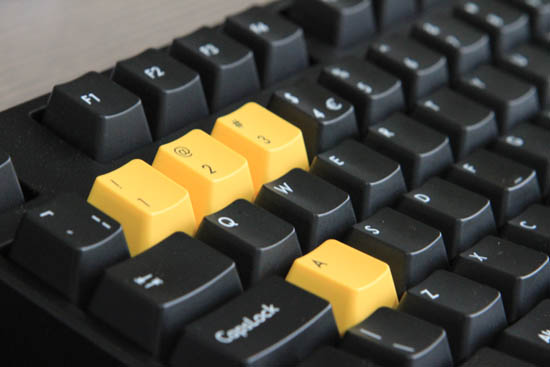 Looking forward to using it a lot more on the ladder – although that may have to wait for a little while as from this Thursday onwards I will be travelling to the U.S. for a month on an eSports pilgrimmage of sorts, and I’m not sure how much free time I’ll have to play.

I will also be attending MLG Anaheim, so hopefully I’ll be able to meet some of you there. See you soon! :-)