WARNING: This post contains spoilers (more towards the end) from GESL

I will confess this has indeed taken a while (I blame WCS and Dreamhack for casting commitments causing me to do other stuff during the week, haha!) but I now move on to the fourth and final chapter of my trip to the U.S. back when summer was just beginning. For those who haven’t read, my previous post here takes us through my experience at the rather impressive MLG Anaheim event, and I left the venue feeling pretty pumped up indeed about what was to come. After learning so much about live-event casting and production there, we move to a significantly smaller, intimate venue at CalPoly Pamona to host the Gigabyte eSports LAN, a 16-player invitational tournament where instead of being in the background the casters would rotate on and off stage for the whole weekend.

Regrettably there are a limited number of behind-the-scenes photos at this event, not because I didn’t want to take any but because we were almost always rushed off our feet despite having seven casters present, and during downtime we all took the opportunity to rest up as much as we could! That said, it really did result in what I would consider a successful event despite the number of drawbacks that we experienced over the weekend, which I’ll get into a bit later.

Arriving on the Thursday before the event started, we promptly commandeered the Death-On-Wheels (The nickname unofficially given to Zoia’s car) to head to a local Japanese place for dinner. There were two reasons for this: firstly, it was great to finally meet Zoia in person with whom I’ve casted innumerable Playhem dailies with (mainly ZvZ as those of you who have followed us would know is Zoia’s favourite match-up by a country mile… *dripping with sarcasm*) and secondly because Zoia would not stop going on about how he had never had sushi in the months going up to the event, so we were to indoctrinate him to the fine art of raw fish.

Sadly this didn’t quite go to plan, and after listening to Zoia for half an hour on how raw things should not get consumed (read: we ate all his sushi while he was talking) we had a quiet evening resting up in our hotel. We actually swapped hotel rooms once because we found out that sadly the free WiFi in the hotel didn’t seem to work unless you were smack bang in the centre of it and being the nerds we were life was not possible without an internet connection. We also needed to rest because call-time the next morning involved Zoia ferrying us from the hotel at crazy o’clock, otherwise known in nerd circles as prior-to-noon. 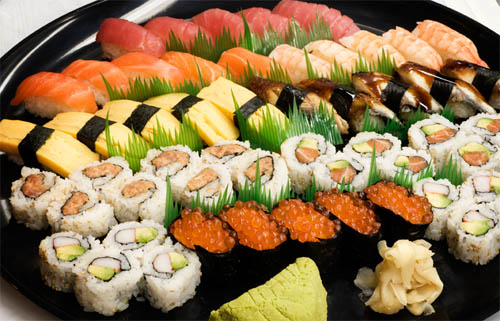 There is so much YES in this photo.

The Friday was a day of a lot of commotion, although mainly due to a lot of things beyond our control! As people who watched the tournament will know, Riot decided to release a patch for League of Legends on the weekend of the tournament that caused the servers we  wanted to use to refuse co-operation with absolutely anything we were doing. This was, however, a problem we had to deal with AFTER finding out that a lot of the internet ports we were to use back-stage were not actually enabled! We eventually did manage to solve this venue issue but by this point it was sad that most of the Friday (streaming-wise, the live games still went on for the audience without much of a hitch!) was a write-off.

Now, here’s what nobody has read about the event anywhere else, because in the weeks (dare I say months) after the GESL there was a bit of drama going on behind the scenes – throughout all of this, you really should have seen backstage. There were about twenty staff, all volunteer I hasten to add, who were running around like nobody’s business getting ready for when streams were going to come back up and making sure everything and everyone was in the correct place. In fact, the amount of energy backstage was possibly the highest I saw over the entire weekend on the Friday night because people were working so hard to ensure the remainder of the event went smoothly. And for that, I’m eternally grateful. Even Gwin was busy soldering parts together for some of the caster’s headphones into the evening on the Thursday (and doing yet more stuff on the Friday!) and was keeping the event on-track seemingly through sheer will alone. 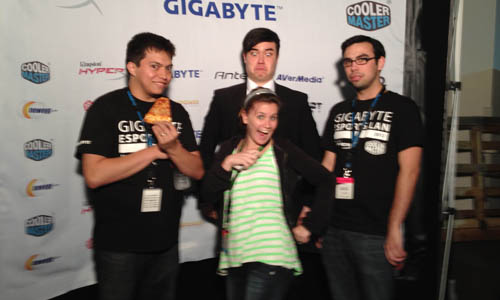 This photo was taken long after the streaming issues were resolved, haha.

Things were on track to go quite smoothly on the Saturday and indeed they did once the initial issues were resolved on the Friday evening. There were a lot of fantastic games in the group stages and you could tell that the players really put in a lot of effort to preparing for their particular match-ups by the small changes they make to their play. Particularly memorable was Axslav’s matchup against Tails where the resident NA player showed some of the Korean contingent that they were not to be taken lightly!

A lot of the things that were going on in the periphery were great as well – the sponsors booths were really getting involved with the spectators and the event genuinely had a grass roots feel to it – there was even a silent auction for signed posters (which I got to sign, le gasp!) which I thought was a brilliant idea. 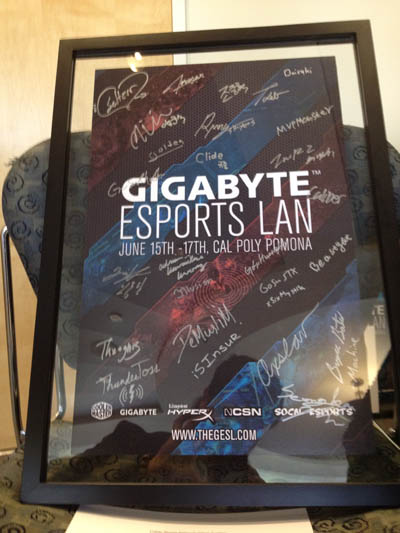 The player cards that were on the wall at the entrance to the event were also I believe given away as raffle prizes later on, with the players putting their names to their respective images as they went past which was another lovely touch. 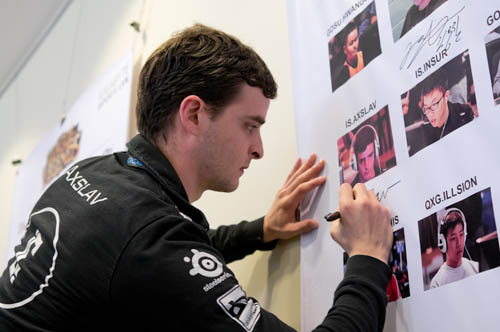 There was also a hilarious moment when I was downstairs grabbing lunch at the sandwich place as well – I was standing in queue with Brandi getting ready to wolf something down before dashing back upstairs to cast more, when someone came up to me and asked for my autograph! I was pleasantly taken aback (I hadn’t casted that many events before the GESL and a lot of the people that were there that weekend weren’t at MLG Anaheim the week before) and happily signed the boxed SC2 that I was handed.

It was only halfway through eating my sandwich that it dawned on me the person who asked for my signature never actually mentioned who I was – and we concluded that because I was dressed in a suit, I was hit by an autograph-hunter that had no idea who I was ;-) Laughs and brief choking on sandwich ensued!

Sunday was a thrilling affair with one theme in particular – in my humble opinion, all the best matches on the Sunday were mirror-matchups! Now of course that’s not that big a coincidence considering that there were so many Zergs in the tournament and that the Terrans bowed out early, but every matchup seemed to be a very close game of intense skill rather than the coin-flippy nature that some of us might expect from a decent chunk of ZvZ’s and PvP’s at the time. It was such a pleasure to watch! Two of my favourites are here, without spoiling the results. I highly recommend them:

Sunday produced fewer games as the tournament shifted towards the elimination bracket but they didn’t get any less epic, as I’m sure the series above would go some way to show. Because of downtime between matches and additional coverage being given to League of Legends (and well done to them, extremely popular over the weekend!!) we had a lot of fun doing various interviews. I managed to get snagged into an interview with Zoia and after also losing a rather horrendous bet on a KawaiiRice game with GHOSTCLAW, I was coerced into giving him an interview as well.

The obligatory still image as well as GIF was provided to me afterwards from itsjustatank. Both himself and GHOSTCLAW were at the venue all weekend frantically helping with the online / Liquipedia stuff as well as being resident photographers, so we owe them a lot for their hard work behind the scenes! 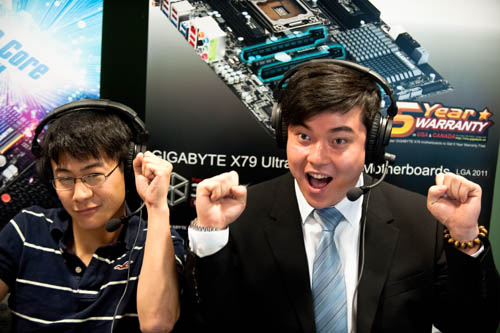 The players were particularly pumped about watching the matches too and it was great to see a lot of them hanging around to see the later games being played.

(Spoilers below, stop here if you want to watch the above matches first before reading about the finals!) 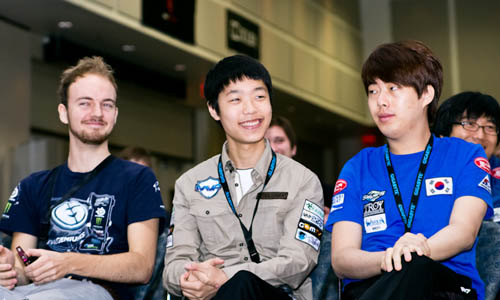 In the end, the finals were heartbreak for viOLet but presented MVP.Monster with an extremely emphatic tournament victory that he was so pleased about. The entire room was buzzing almost off of his happiness alone as he happily grabbed first place in a pretty darned exciting Bo5 ZvZ and walks off with a pretty cool looking cheque as well. 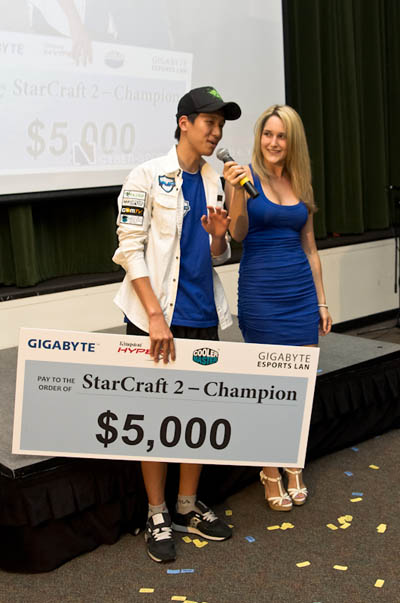 The event was far from over, however – throughout the Sunday and indeed after the finals plenty of raffle events were going on to entertain the fans that had dutifully stayed until the end. I couldn’t believe the sheer amount of swag the sponsors had brought to the tournament but if their aim was to raise awareness about their products and generate excitement, they sure did a fine job! Rachel ‘Seltzer’ Quirico, who did a splendid job of hosting all weekend, is seen here sitting with some of the huge piles of stuff we had to give away – I think the ‘stack’ was restocked at least four times throughout Sunday! 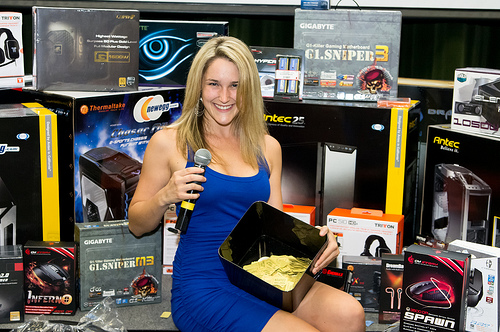 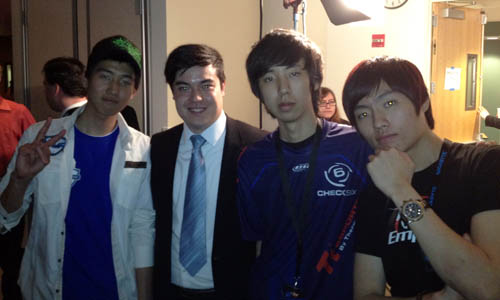 The Zergs are invading – JoRoSaR with the top three at GESL

The last final touch on the tournament, though, was really quite impressive. After everything wrapped up on a successful Sunday, the staff stayed behind for a sneaky raffle of their own, where lots of pat-on-backs and great conversations were had before things were to be packed away and people went their separate ways. I think it was a great way of thanking all the staff (especially the volunteers! LOVE THEM LOTS GOGO) that worked tirelessly throughout the entire weekend – as far as a ‘first time’ went for a tournament, I dare say it was highly enjoyable indeed. 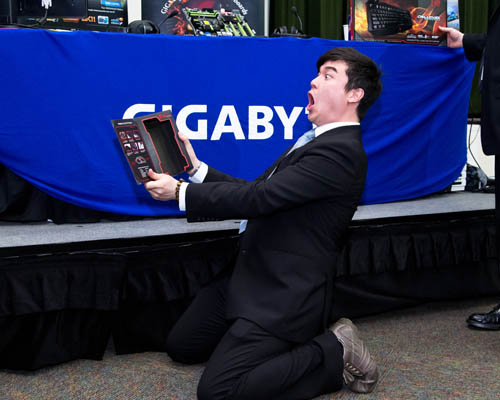 So it turns out the sexy mouse box on the casting desk…was empty? LE GASP! 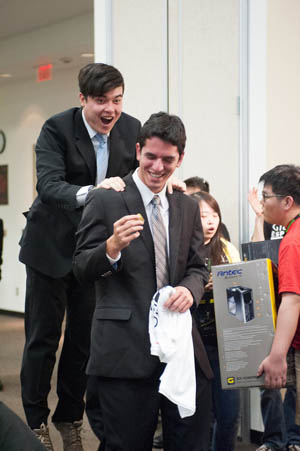 Axeltoss was also one of the lucky winners at the last raffle where this gem of a photo was taken.

And – did you think I’d forget? – we were in a student building with a built-in arcade. There must therefore have been adequate time for us to sneak down to the DDR machines and play a little bit before heading home. 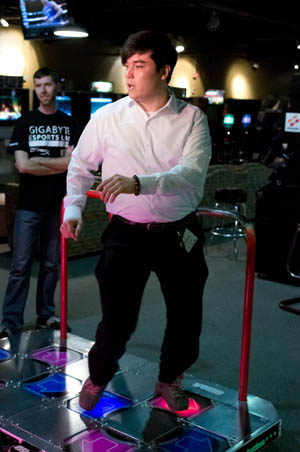 After an absolutely packed few weeks in the U.S. it saddened me that this was my last outing before heading back to London on a plane just a few days later, but every moment was worth it, to use a bit of a cliché. This trip really taught me a lot about the working environment at a live tournament and I got to meet with and help so much of the community that I would return home with a massive smile on my face, and a huge sense of pride knowing what communities in eSports can accomplish. I cannot wait to watch the scene grow, and see even more (and bigger!) tournaments in the future. 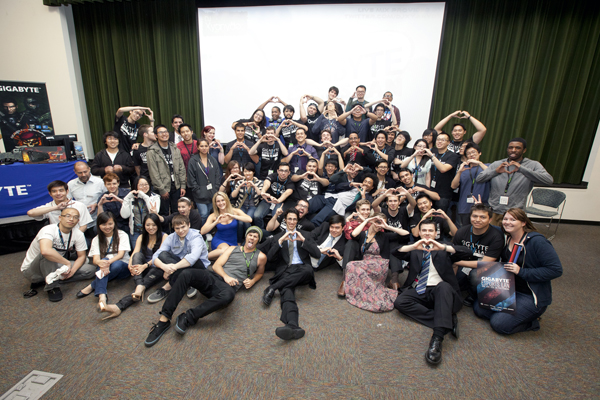 Until next time! For now…Europe ;-)

One comment on “The American Adventure Part 4 – Gigabyte eSports LAN”