Hello everyone! I’m writing from a coffee shop in Shanghai while I wait for a connecting flight to the US for IPL5. I hope you enjoyed the Intel Extreme Masters event in Singapore and I’m looking forward to casting at another epic tournament this weekend.

I wanted to share a short story with you about something I witnessed on my way to Singapore. I was fortunate enough to be sitting in an emergency exit row so I had decent legroom and was preparing to nod off to sleep. Next to me were an older English couple who were visiting relatives in Australia and stopping in Singapore as a layover.

About half an hour into our flight, a flight steward by name of Anthony walked past and exchanged pleasantries with the couple, who then started a little bit of chat about Singapore. He sat down opposite (the crew seats on the exit rows face backwards) and started talking to them.

I expected to fall asleep anyway, except I didn’t. The more I sat and listened with my eyes closed, the more interested I got. Conversation ranged from Singaporean history to a detailed discussion of what makes a whole variety of national Singaporean dishes unique to their cuisine and where to go (down to the individual restaurant in what region of Singapore) to sample each. It was apparent to me that Anthony was not just a flight steward here for a job – he was practically a qualified Michelin-starred chef and had such an engaging personality he could keep you locked in for hours. 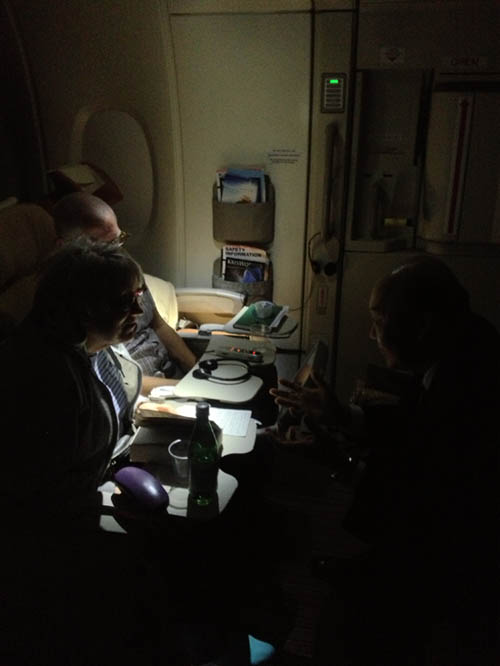 Before I knew it, I was also joining in and chatting away. It turns out Anthony’s son is an award-winning chef and he also has a passion for cooking himself. He spoke in depth about how cuisine has changed in the last few decades, recipes for the new sous-vide that he was planning on buying and favourite local haunts.

He doesn’t need to be doing this job, but he wants to. He said there were two types of people who got a job like his – those who wanted to see the world, and those who wanted to meet people and interact with different cultures. And this distinguished gentleman was certainly one of the latter. He is normally up in First Class, and is regularly poached to be head steward on flights involving diplomats and heads of state – but his idea of taking a break is to walk through the aircraft and have in-depth conversations with as many interesting people as he could find from all walks of life.

I eventually went to sleep, but not until three hours later. And those three hours were filled with some of the most captivating, interesting conversations I’ve ever had.

The couple next to me left the aircraft with smiles across their faces, as did I – as well as several pages of written notes on what to do and where to go in Singapore. Anthony may have officially been a steward, but it was abundantly clear that he had a burning passion for things he did away from work as well, a determination to excel and succeed.

As one of the few Starcraft II casters at major events who does not have a full-time job in eSports, I took a lot from this. It’s great to know that with passion and motivation, you can be amazing at things you set your mind to – even if you don’t necessarily have the job title to match.