I’m really excited to be commentating and hosting the G3 StarCraft 2 tournament this weekend in London’s Copper Box Arena. As well as being in the same venue that hosted the 2012 Olympic Games, the event organisation and calibre of players across all the games being played (including StarCraft II, FIFA, Counter-Strike: Global Operations and Call of Duty: Ghosts) is of such a high standard that it’s guaranteed to be an action packed weekend from start to finish.

There are 12 players in the G3 StarCraft 2 tournament, nine of whom are invites and three who got there through online qualifiers. There are $30,000 and 3,375 WCS points on the line, guaranteeing high-stakes, gripping StarCraft action all throughout the weekend.

The group stages will be a round-robin Best-of-3, where one player will be knocked out and two will move forward into the Quarter-Finals. We then have Bo3 Quarter-Finals, Bo5 Semi-Finals and a Bo7 Final for the lion’s share of the spoils.

Let’s take a closer look at the G3 StarCraft lineup. I will also be giving my predictions for what my Head and Heart say about who will advance to the knockout stages. 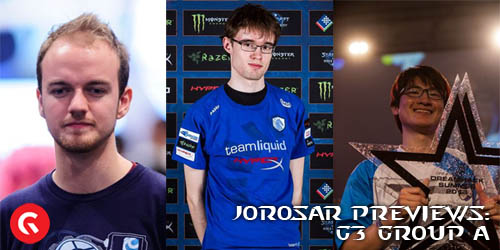 I’m not sure we can call Bunny ‘up and coming’ any longer, he has certainly improved leaps and bounds in recent months and is making a strong case for himself in mixing it up against some of the best players around. He beat three established Korean pros in Patience, Sleep and Samsung Galaxy’s Armani to earn his place here – which really showcases how far he has come. He’s also beaten both of his opponents before – DeMusliM at DreamHack and StarDust in a HomeStory Cup qualifier, although that was a year ago now.

DeMusliM has been quiet of late, recently losing his Challenger League match against Miniraser. That said, he isn’t up against another Zerg here, and the Devil Terran has a fantastic ability to quietly build himself back up and come back strongly before – he is a true fighting character. I’m not sure it would be enough to top the group, but I think that Bunny’s rise in status has the potential to get tested here if a rejuvinated DeMusliM shows up.

StarDust currently seems like he’s on another level. He has cast off his image of the persistent cheeser (‘CheeseDust’, anyone?) and has really grown up in his play over the last couple of months – with devastating results. After crushing his way through San to the most recent WCS EU Premier League championship, it’s hard to argue against him winning this group outright – the real question will be who waits for him afterwards, and who will follow him through. 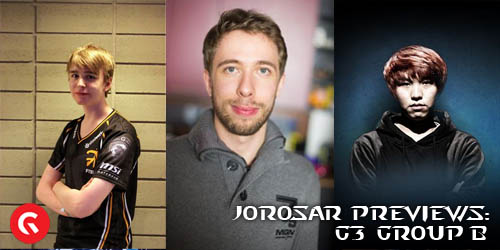 Zanster is one of those players who quietly gets on with it in the background as a member of the Fnatic academy. He wins more than his fair share of Go4SC2 cups, and recently won the E-Sport SM tournament in Sweden with a finals victory over ThorZaIN, who let’s not forget while relatively quiet, recently became the first non-Korean player who win a ProLeague game in 7 years. He has beaten TLO before at a DreamHack, but has lost to him as well – and this is all in the group stages played in the side area. He has no games won against HyuN on record. The G3 StarCraft 2 tournament will be a real test of his mettle and his nerves on stage.

TLO is a pillar of the StarCraft 2 scene and an example of work ethic – he has enjoyed a mini-resurgence of late, employing solid strategies while still incorporate creative and innovative (this word is so used so often but also so appropriate!) in his tactical approach to the game. This makes him a difficult opponent to predict but at the same time not someone you can easily beat in a straight-up game. He also finished 3rd/4th at IEM Sao Paolo, beating players like (qualifiers + main tournament combined) Bomber, StarDust, MaNa and Snute.

The HyuNstoppable force, however, is the third player in this group and is the favourite to take this all-Zerg encounter in Group B. His overall ZvZ winrate is about 10% higher than both TLO and Zanster – and in a mirror matchup where the tiniest of mistakes can prove not only disastrous but VERY QUICKLY disastrous, his edge is a big one here. 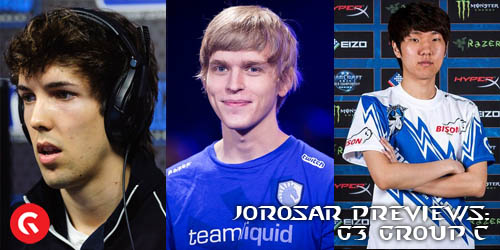 This group is, in my opinion, the toughest one to predict by a comfortable margin. Jjakji has been a solid player for mYinsanity for a long while now but has arguably slipped into StarDust’s shadow in recent months given his recent success. He will be eager to prove himself here but his group is definitely not easy to progress out of, with two non-Korean players who can both defeat him on their day – and different races to boot.

He has a fairly even recent record against both of the other players in his group as well, trading IEM Qualifier victories with Snute and WCS 2014 Season 1 Bo3’s with Grubby (once in a qualifier, the other in Premier Ro16).

Snute has been an all-round solid performer for TeamLiquid but has lost several of his more recent Terran matches while winning against most of his Protoss opponents, which is currently his favoured matchup. In a group representing all three races of StarCraft, this will be an opportunity for him to show that his all-round game is where it needs to be.

Grubby is one of the most passionate performers out there and his 3rd/4th place in WCS Europe when losing to eventual champion duckdeok last year can still be pointed to as proof he can string together epic performances. I remember his non-stop nail biting 3-2 victories in IEM Singapore (Season 7) where sitting at the desk commentating his games was akin to asking me to keep a heart attack consistently at bay.

Any one of these three players can win the group, and all three to an extent have performances that partly rely on ‘who shows up on the day’. This is an extremely difficult one to call and is definitely the group where I’m least confident in my predictions. 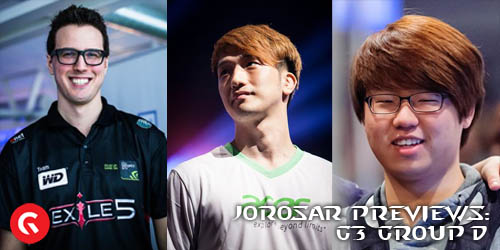 Starting with the Australian Zerg playing for Exile 5, PiG gave us a mirror-match masterclass in his qualifier, defeating Golden and then going on to beat Impact 3-0 to secure his hard earned spot at the G3 StarCraft tournament. He has also been living and practicing in the mYinsanity house for the last month, sharpening his skills in Europe in preparation for tournaments like this one – and he will be aiming to make a big impression here.

The issue he will be facing is that he doesn’t have another Zerg in his group – instead, he has two champions and legends of StarCraft. He has lost 0-2 twice to MC in recent DreamHack group stages and will be looking for revenge here, but this is going to be ridiculously difficult.

MC and MMA have faced off in the WCS EU finals and have beaten each other before (more recently MC in 2014 Season 1). They will be the heavy favourites to advance out of this group, but PiG might fancy his chances of slipping through in light of his recent practice regime and strong overall game. I can’t see PiG winning the group but I can see him potentially pulling off a Bo3 upset (in my opinion more likely against MMA whose form has been more up-and-down of late) to sneak in 2nd place.

A massive thank you to Anders Ingebrigtsen (@ingebrigtsen93) for helping me pull together a wealth of data for this preview article! :D