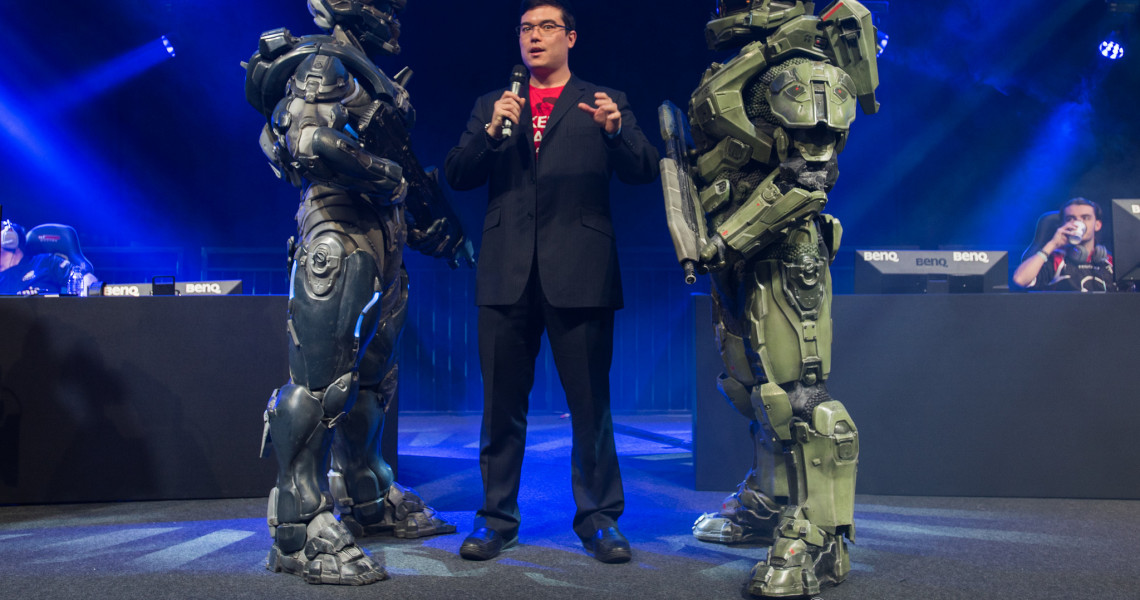 Over the last weekend I had the pleasure of hosting the eSports stage at Insomnia 56. This was the first Insomnia event at the newest iSeries venue as well, located at the amazing Birmingham NEC – the largest exhibition space in the UK. It’s pretty incredible that the LAN has grown so much that we’re now here – it looked, sounded and felt amazing. 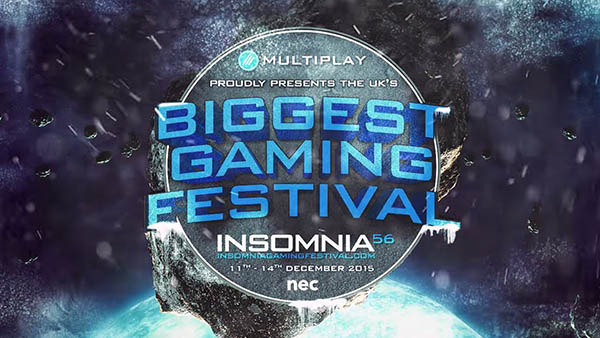 Off the back of the events I was involved with last weekend and a long week at work, this made my December schedule really hectic but I wouldn’t want it another way if it means getting to great events like these! I had a bit of trouble with being ill on Friday and had to fight through it for the community games night, but I was prepared in time and the energy of the crowd really carried me through.

On Friday we played a combination of community Rocket League (King of the Hill format), Scrabble League (2v2 League of Legends where champions picked have to start with an assigned letter!) and Guitar Hero Live which was great fun. There was even a bit of dancing involved including one of our own ace cameramen – check out the video I posted here! 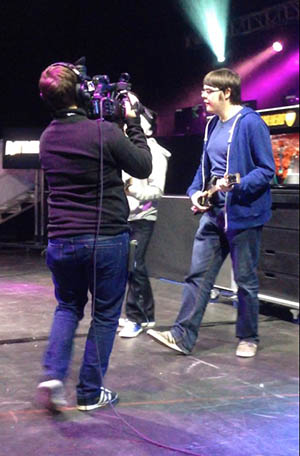 The stages were superbly set up for both the eSports stage and Hearthstone stage, which overlooks the BYOC tournament hall. The view was glorious and the atmosphere inside the player’s hall was buzzing from the outset and lasted more or less all day and night for the entire Insomnia 56 event.

One of the highlights for me was meeting and chilling out with a great group called the Hostile Otters, who participated in both the community Rocket League tournament on Friday and the on-stage finals of Rocket League on Saturday. Originally a group of friends who go travelling and paintballing together, they now also LAN together and have a seriously cool team jersey as well. I wore one on stage at the end of the finals (obviously I am completely unbias), although that backfired slightly given that they ended up losing to the amusingly named Petr Cech Yourself – but it was a great match and everyone had a fantastic time. 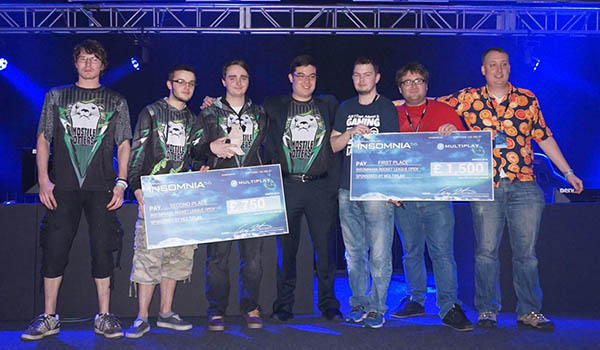 Numerous football and otter puns into the mic later we also caught up at the world famous Insomnia pub quiz, held in the big main event hall for the first time at the NEC. The atmosphere as usual was amazing and Birmingham has possibly never heard a louder impromptu rendition of Bohemian Rhapsody. The quiz was eventually won by the Charlie Sheen Needlework Appreciation Society (brilliant) and the Hostile Otters had a pretty solid glow-stick Christmas tree to light their way to a competitive finish. 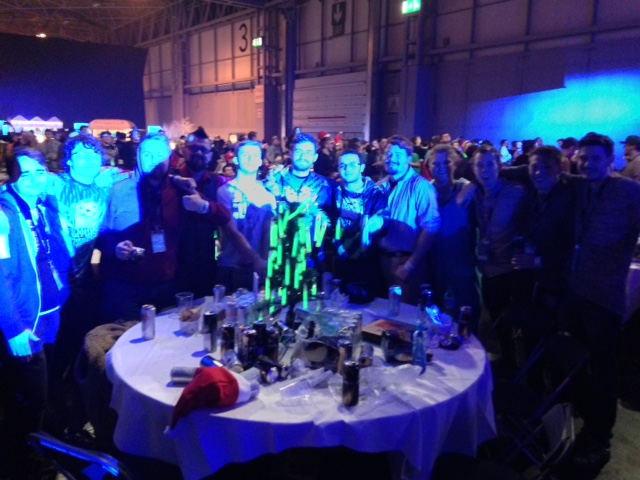 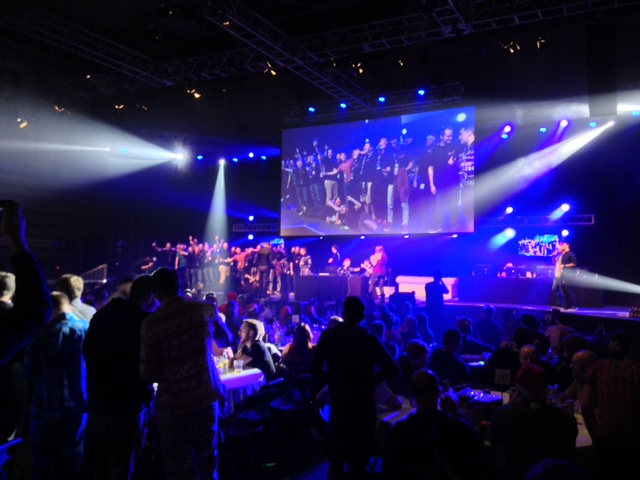 The i56 Production Team & ResortWorld

After Saturday’s League of Legends final I met up with the incredibly hardworking production team here at Insomnia 56 and we had a quick drink and debrief. Even though call time the next day meant we would only just squeeze in enough sleep, it’s still great to unwind and socialise with the people that make the streams and at-venue entertainment what it is. The photo below only shows part of the team – there are many more people behind the scenes for both stages in our hall making sure everything runs smoothly and looks great. 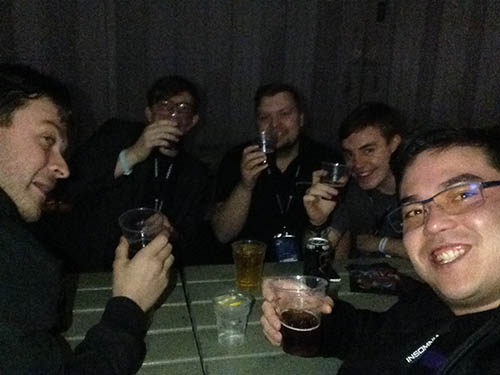 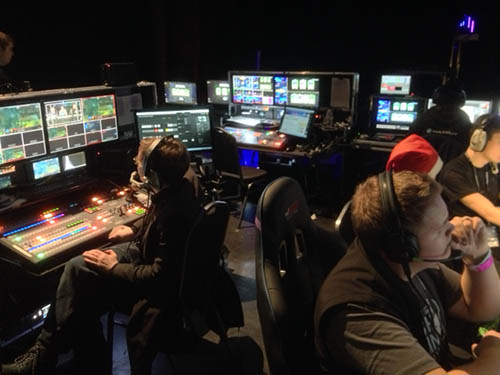 I was also able to check out the beautiful ResortWorld building nearby which houses all manner of entertainment and restaurants, and even includes a full IMAX cinema. Wouldn’t it be nice if this was also over the first Star Wars Ep. VII weekend so we could go and watch it afterwards at midnight? Sadly timings haven’t quite worked out on this occasion but it’s definitely somewhere I’d come back and enjoy a day exploring. It’s also very pretty outside around the lake in the evening. 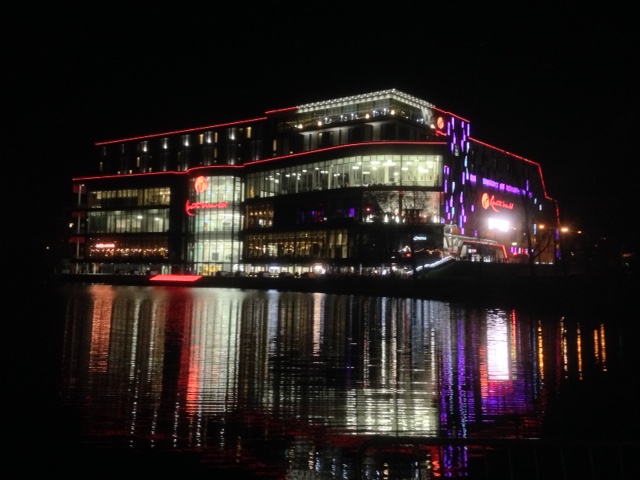 The Expo Hall at Insomnia 56

Even though I was heading up the eSports stage, the life and soul of Insomnia is the great combination of the BYOC / Camping halls and the expo hall. I managed to walk around while filming a VT on Saturday, and really enjoyed checking out all the amazing stands, merchandise stores, new games and cosplay that was on offer. It’s not everywhere you get bodyguards like these: 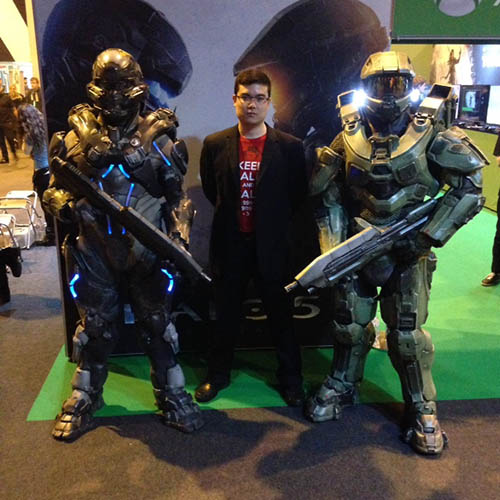 The merchandise stalls also helped me with ideas for a few stockings this Christmas as well, some of the jumpers especially were absolutely genius. My only complaint is that there aren’t enough days left before Christmas now to wear them all! 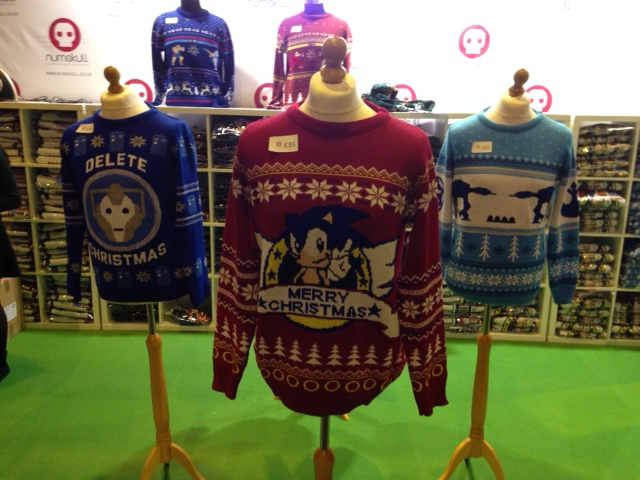 Check out this YouTube video below as well for a tour of the Insomnia 56 eSports stage, BYOC area and expo hall, shot by the awesome content team!

It’s really clear that in the move to the NEC Insomnia has once again gotten bigger and better, although where they go from here is a good question because we’re now in the largest exhibition space in the UK! Fortunately there are over 20 halls at the NEC and we’re not using all of them, so this won’t be a problem for quite some time. Imagine how amazing it will be if we end up doubling or even quadrupling in size over the next year! I’m looking forward to watching iSeries grow into 2016, and can’t wait to come back. 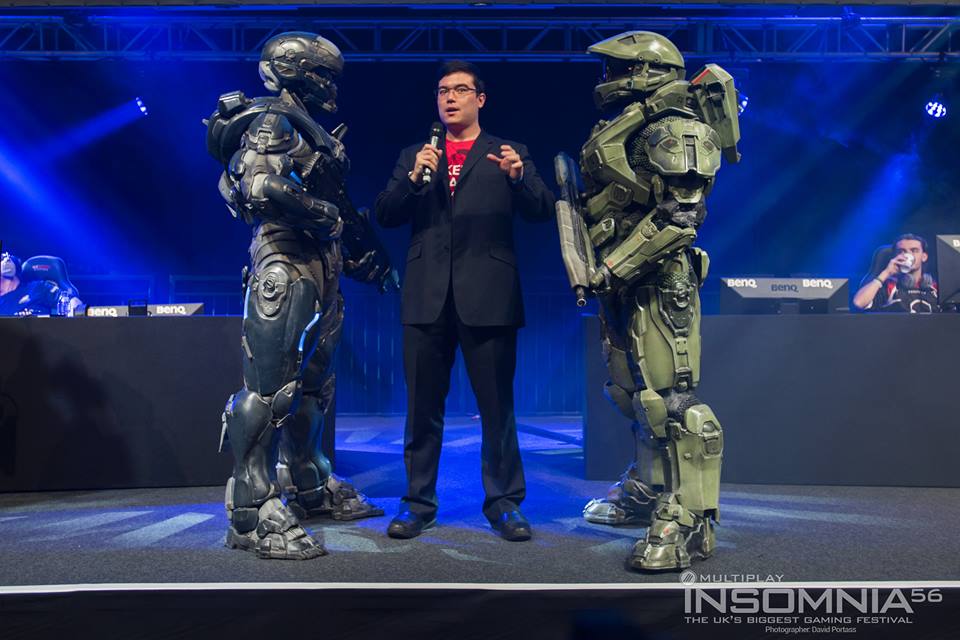