Interview with SK Powder from the Hearthstone Insomnia Truesilver Championship 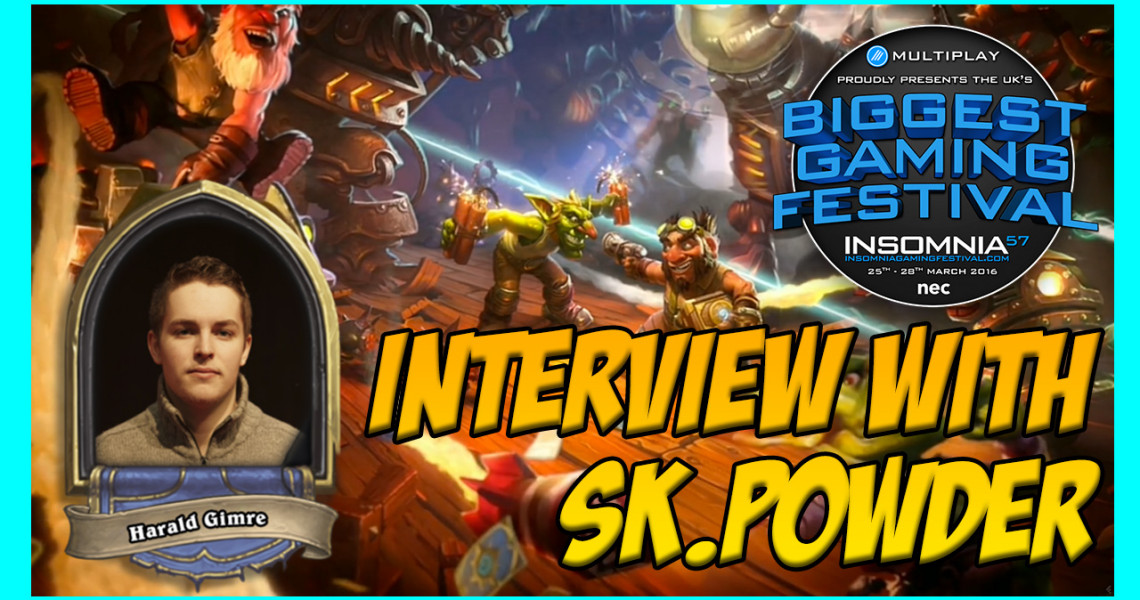 I sat down with professional Hearthstone player SK Powder after his great run into the top 8 of the Insomnia Truesilver Championship, and got his thoughts on his performance and the tournament as well as Hearthstone in general and his life outside of the game as well. Check out the video and interview transcript below! :)

John “JoRoSaR” Sargent: Hey guys, we’re back at Insomnia i57 and I’m sat down with SK Powder, who’s had (I’ll let him tell you about it) a decent run through the tournament so far and is doing quite well for himself! Before I say anything else, how are you, how’s it going and talk us through your tournament so far.

Harald “Powder” Gimre: Yeah, like you said I won both of my matches today to the Top 16 so I’m through to tomorrow’s Top 8. I couldn’t be happier and I’m 7-2 total for the tournament. It’s a lot of matches but it’s been going really well.

J: Do you know who you’ll be facing tomorrow yet, or does the draw happen a bit later?

P: I think I could find out if I wanted to but I haven’t yet! It’s not like I’m going to prepare right now – I’ll go back home when everything’s finished, sit down and watch the VoDs. [I’ll play] some second place finisher in one of the groups, I’m not sure which one.

J: And how have the decks you’ve brought to the tournament performed so far? Has everything met your expectations, with hindsight would you have swapped anything out to be even stronger? How’s the meta felt at Insomnia for you?

J: You’re going to have to give me some tips, I can’t get past Rank 5 with that deck!

P: In my first game today I was playing against control Warrior after winning the first game. I have Crackle in my hand, he’s on 13 life – I needed to top deck some damage or Doomhammer. I top deck Lava Burst, and have exactly seven mana – so I roll a spell power totem, hit for six, he has seven life left…I’ll just Crackle. Crackle for seven!

J: He must have been so angry.

P: Well, we can’t change decks between [day 2 and day 3], but from what I’ve seen so far most people brought basically the same decks they brought yesterday. When you prepare as much as most people did for the Swiss part [of the tournament] you don’t change much – maybe you change some tech choices as now there’s a bit more Rogue – it’s a hard deck to play but a lot of the better players favoured Rogue to counter zoo decks. Maybe some people brought Rogue counters but I’m expecting pretty much the same things.

J: Fair enough! And speaking of competitive Hearthstone, we shouldn’t be too far away from the launch of Standard play – what are your general thoughts not on the new expansion, but on Standard play and how that’s going to mix up the competitive scene?

P: I think it’s definitely going to be interesting. I’m not sure how it’s going to change [competitive play] up – because of the new expansion (not knowing all the cards), I think that’s going to play a bit part in how things are going to play out. I do like that they’ve taken away some of the more broken cards; some of the cards that kind of shift games in one player’s favour just because something

no images were found

happens – take Dr. Boom for example. Say you’re playing Rogue – “as long as they don’t play Dr. Boom this turn, I win”. And then they play Dr. Boom and you lose – it’s pretty ridiculous. And [Piloted] Shredder, for example, when it drops Doomsayer there’s nothing you can do about it – it just happens. You just have to go with it. It shouldn’t be like that in a professional eSports game.

J: There’s always going to be a balance between ridiculous plays like that and RNG, right? It’s impossible to eliminate RNG altogether, so where do you draw the line on what’s acceptable and what isn’t in terms of balancing where that tipping point is?

P: A good way you can look at it is with deathrattles – there’s [Unearthed] Raptor, [Piloted] Shredder and [Piloted] Sky Golem. There’s no really bad 1-drop – you know what you’re getting. The best is a 2/4 [Injured Kvaldir], most of the time you get a 1/1 and at worst you get a 0/4 [Shield Bearer]. It’s nothing that impacts the game completely. With Sky Golem normally it’s like a 3/4 or 4/4. Sometimes you can get unlucky and get a 4/1, but it’s still nothing that impacts the game so much that you just insta-lose or insta-win just because a Shredder drops a Doomsayer, an Explosive Sheep or something like that. Stuff that you can’t play around, which Shredder is because you don’t know what’s going to drop, that I don’t like. [At least] you can always play around Boom Bot RNG .

J: So taking a look at something that might be a bit less RNG-oriented with the Old Gods expansion coming out, based on what you’ve seen so far do you think from the cards that have been revealed and the way things are likely to play out competitively are going to make the game better?

P: I actually haven’t seen a lot of the cards because my Twitter account got hacked four days ago – and that’s basically how I reach all of the media I see! So I’ve basically been in the dark for 4-5 days. But from what I saw before, there were some “meh” cards and some that were pretty interesting. We’re just seeing what [Blizzard] want to show us so far – some fun cards, some synergy cards. I’m expecting there to be a lot of good, solid cards. I think they learned a lot from the last expansion where there were a lot of good cards.

J: There’s a lot of continuation on the theme similar to Mistcaller for example, where you’re influencing stats of cards that aren’t yet on the board. It looks like we’ll be moving quite a lot with this idea in the new expansion. Do you think that might be removing some of the RNG from the game and making the scene more competitive?

P: We’ll see. I mean, there’ll always be RNG – it’s a card game. Card draw is based off of RNG and you have to draw well to win games, that’s just the way it is. As long as they remove some of the in-game RNG when trading, the game is going to get a lot better. There are a lot of exciting moments that happen when something drops from Shredder too – if you really enjoy Hearthstone, there are a lot of ways in which a game can be really exciting.

J: Speaking of enjoying, I want to talk a little bit about your life outside the game as well – some of the other stuff you enjoy. Talk to us about the Powder that isn’t playing Hearthstone professionally – what other stuff do you do in your spare time, and what kind of things did you do in the past before Hearthstone?

P: Right now, I mostly sit at home playing computer games! I started studying this semester to see if it was possible to study and play at the same time. Hearthstone doesn’t require CS levels of dedication where you sit down with your team to practice – you can practice in your own time. It didn’t really work out, flying to events was a little too stressful because of getting back, having three days of school then missing four. Now, I sit at home and play more games – I’m waiting for the weather to get a little better so I can start playing some golf again!

J: This is [the U.K.] so I hope you’re flying back somewhere else, because the weather’s never getting better here mate! Talk to us about golf – apparently you’re pretty decent!

P: Yeah, I used to be pretty good – I’m still pretty good! I played for the junior Swedish national team!

J: I didn’t realise there was a junior Swedish national team!

P: Haha – in any sport there’s a national junior team. Golf is one of those sports where you have to be really dedicated and really like the sport to play it that much, but it’s a lot of fun. I enjoy it and it’s really relaxing for me.

J: And do you have any aspirations to take that further in the future or is it just something you do to unwind in your spare time now?

P: Just for my spare time – there was a point in my life where I thought I could play it professionally but I never really had the dedication to actually stand there and hit balls all day! It’s easier when you’re sitting on your computer and can play for 6, 8, 10 hours a day but being out there, actually doing work…!

J: All right, so before we sign out – it’s been great fun chatting to you – any shoutouts or people at the event you want to say hi to?

P: Shoutout to my organisation, SK Gaming and all of our fantastic sponsors! Specific shoutout to Spooderman on my team who’s a fantastic person and helped me a lot to prepare for this event. He is my rock!

J: Thanks a lot for chatting, dude – and best of luck in the tournament tomorrow. We look forward to watching your games!

The full link to the interview with SK Powder on YouTube is here: https://www.youtube.com/watch?v=aCBCXCzw12I&list=PLL7FoA_XuuOnEqUkeuF3F9K4mqEnN9ggk